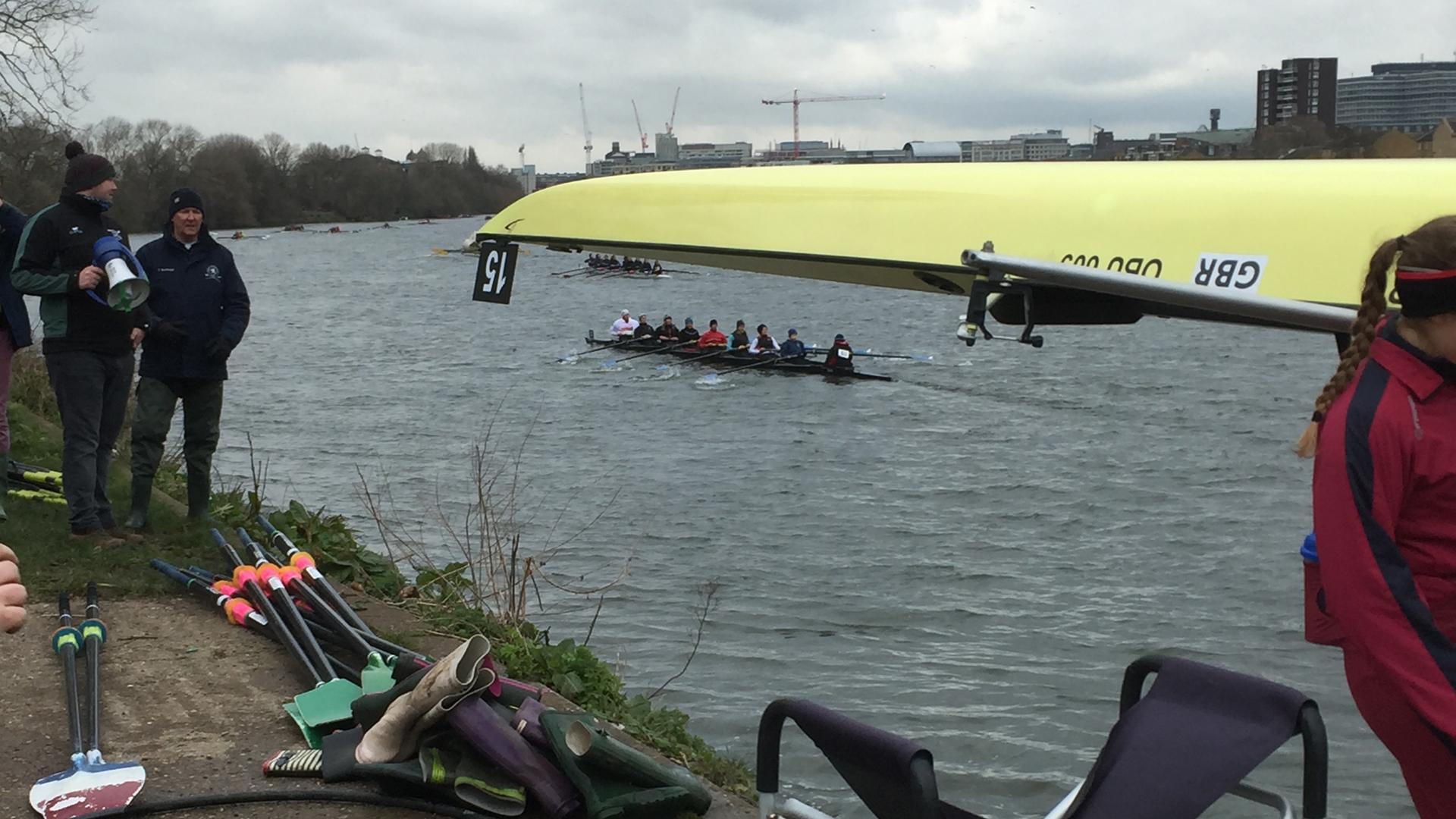 Tyne United Masters Women’s Squad claimed a historic first on Saturday 5 March.  For the first time a full Tyne Untied crew competed at The Women’s Eight Head of the River Race, held on the Thames Tideway in London.  This year the race attracted a record number of 342 crews from around the world which included crews from elite to novice.  Tyne United’s 8+ finished in a time of 23.18.2 with the added bonus of beating local rivals Talkin Tarn.

The race was the culmination of the winter Head series and months of hard work which had started in the autumn of 2015.  As the nights drew in and the thrumming of the ergo accompanied the Masters Women’s Squad Tuesday’s and Thursday’s training sessions a plan was formed.  For the first time the Club would establish and enter a Women’s Eight into the winter Head races.  Members of Tyne United Rowing Club had competed in composite crews in previous years, but this was to be the first purely TURC entry.

Sweeping all before them

Joyous times were had preparing for fitness tests and the infamous 2k ergo. There was also the minor matter of some of the Squad learning how to sweep row.  A steep learning curve followed, as well as memorable night time water sessions complete with fairy lights.

Thanks to the weather the New Year and Rutherford Heads fell back-to-back and invaluable experienced was gained by all squad members who took part.   A few weeks later a very respectable fourth in the novice category at the Trent Head meant that spirits were high setting off on the road to London.

A chilly London morning greeted coach, Mark French and crew Sophie, Karen, Claire, Lynn, Jill, Sian, Suzanne and Kat. Initially the sun had shone and the Thames twinkled as Tyne United waited to boat at Barn Elms, but soon it became overcast, mirroring the growing tension in the boat. A tension which failed to wane despite the coxswain’s best efforts until the boat’s starting position was secured and the crew’s arrival timed perfectly, with only the minimal time to chill down. The crew stripped for action, swung into place in the middle of the Tideway and, with nerves quelled, a strong performance ensued.  The Tideway did not disappoint: strong winds blew, side-ways rain lashed the crew and the Thames broiled.

The direction from the coxswain, faced with such hostile conditions was to declare, “this is just like home” and the crew rose to the challenge, powering through what latterly was to be regarded as some of the most challenging water the event had seen for years.

Quickly off the water, into dry clothes, boat safely stored; the Team ‘debrief’ started in the Star & Garter but not before retail opportunities were taken in Crewroom and Rock the Boat.  Further analysis and celebrations would continue late into the night over dinner in a Chiswick eatery.

One thing is for certain: with appetites whetted Tyne United will be back for more WEHoRR!